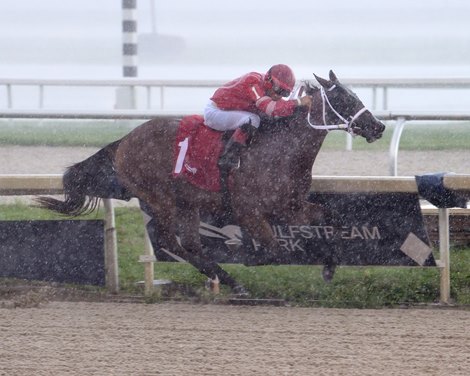 Juveniles sired by Florida stallions take the spotlight Aug. 6 at Gulfstream Park when the track hosts two divisions of the FTBOA Florida Sire Stakes, with one race for fillies and another for colts and geldings, both at six furlongs on the main track.

Trainer Michael Yates will seek his first success in the filly division, the $100,000 Desert Vixen, with a daughter of Cajun Breeze   by the name of Go Lil Lady . A homebred for Shadybrook Farm, Go Lil Lady enters the Desert Vixen off a sharp debut victory at Gulfstream June 9, when she produced a front-running 7 1/4-length romp in a 4 1/2-furlong dash during a sudden rainstorm.

“She had worked well. It was a weird track. It was a harrowed racetrack and it started to pour as they were loading into the gate. It was absolutely pouring during the whole race, so it’s hard to tell anything about the race,” said Yates, who a couple of races later on the Aug. 6 card will saddle Cajun Hope  in the Dr. Fager, the division for 2-year-old males.

Miguel Vasquez has the return ride aboard Go Lil Lady.

Girl Bye  is scheduled to clash with her former stablemate after being privately purchased by Smith Ranch Stables and joining Luis Ramirez’s stable. She graduated at first asking April 21 at Gulfstream by 6 1/2 lengths before running a well-beaten third in the June 9 Astoria at Belmont Park.

Marcos Meneses, who was aboard for her maiden score, returns to the saddle Saturday.

Cajun Breeze also will be represented in the Desert Vixen by Stonehedge’s Val’s Gal . The Ralph Nicks-trained filly graduated at second asking with a front-running 5 1/2-furlong score. Leonel Reyes has the call aboard Val’s Gal.

It should be noted that Cajun Breeze’s half sister, Cajun Delta Dawn , was victorious in the Desert Vixen and the second leg of the series for trainer David Fawkes in 2016.

Fawkes is back for the Desert Vixen with Alex and JoAnn Lieblong’s Trust Me , who is coming off a sharp three-length score in her second career start. The daughter of The Big Beast   came up short in the stretch to finish second behind Lynx  in her May 19 debut.

Trust Me is the 5-2 morning-line favorite in the Desert Vixen just ahead of Lynx at 3-1.

Kathleen O’Connell, the second-winningest female trainer in North American history, will saddle Stonehedge’s This Run’s for You  and Malcoms On the Run  in the Dr. Fager in search of her 13th career victory in the lucrative series.

This Run’s for You has been installed as the 2-1 morning-line favorite in a field of 10 colts and geldings in the Dr. Fager. The gelded son of Khozan   obviously was a fast learner for O’Connell, dazzling in his July 23 debut. The Stonehedge homebred produced an 11-length front-running victory while running six furlongs in 1:10.52. He now returns on relatively short rest.

“The timing is unfortunate, but he came out of the race good and is doing good,” O’Connell said.

Malcoms On the Run, a 15-1 shot on the morning line, enters the Dr. Fager as a maiden with three troubled in-the-money finishes.

Turbo leads the opposition in a race that includes debut winners Knox  and Awesome Strong —the latter a quick 4 1/2-furlong winner in :51.62 May 6