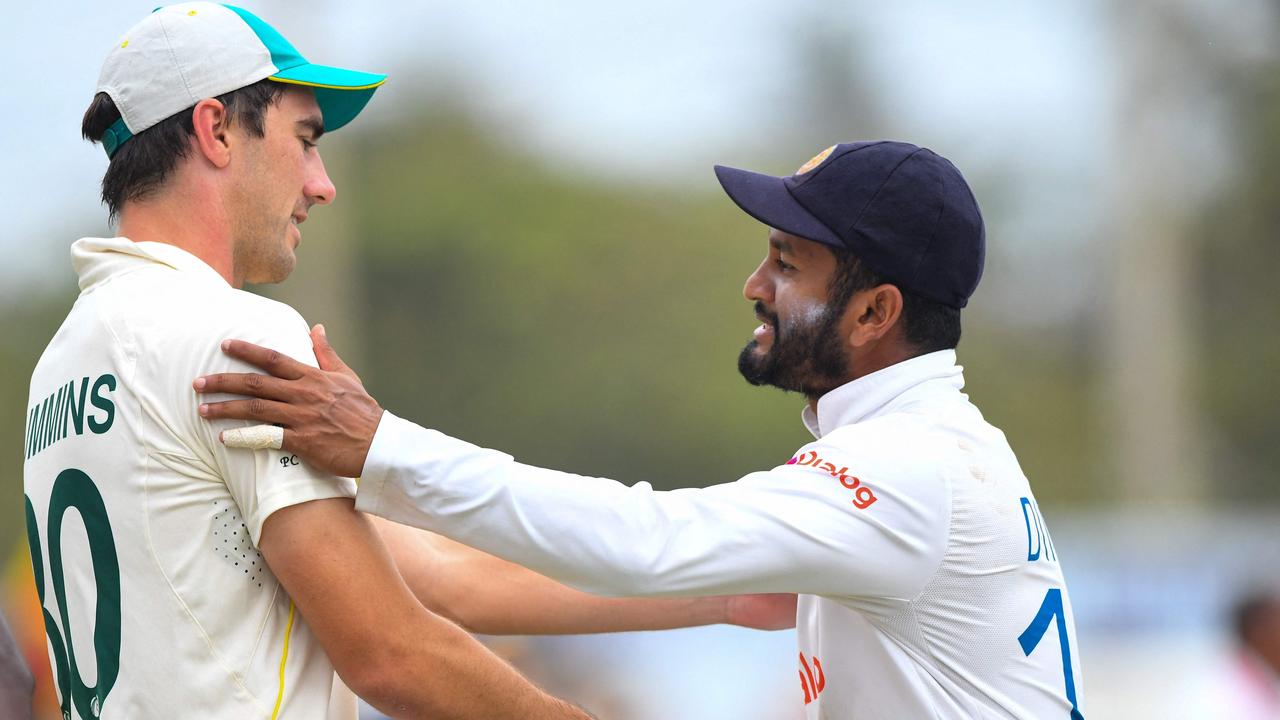 Australian tours have become more chaotic but rather than slip away, the national side are winning over fans.

In winning the second Test at Galle Sri Lanka made history. It had never beaten Australia by an innings before. Dinesh Chandimal’s terrific 206no was the highest score by a batsman from the country against Australia. Prabath Jayasuriya’s 12 wickets on debut ranks among the best …

That history took place on the field as the locals overcame Covid and more to level the series, but the real history was being made around it, above it, despite it and as a backdrop to it.

On the second day of the match the Sri Lankan people rose up and chased its unworthy leaders from their palaces. The game continued regardless but not oblivious, aware that it was a centrepiece to significant events.

The bankrupt government had banned the black flag waving protesters and fans from the fort in the first Test, but by the second they’d conceded that ground and the locals stormed the ramparts knowing that they would be visible to the world.

The local broadcast did its best to look away, microphones were muted to cut out the chants and advertisements for tourism distracted from the street scenes, but the messages filtered through.

Steve Smith, who compiled his hundred amid the cacophony, said it was an extraordinary day “people are outside having their say. We can obviously hear it … I have been playing for a while, but I can’t remember anything (like that).”

The only reason there were protests in Galle was nobody had the petrol to transport the people up the road to the capital and the government had cancelled all public transport.

On the days before and after the uprising the backdrop to the matches was unusually and unsettlingly serene.

Roads normally choked with traffic were empty as transport had come to a stop because of the economic crisis. Petrol is scarce and prohibitively expensive. Boats lay idle in the coves by the venue because there is no Peter Lalorfuel. As a result there is no fish in the markets. Families are going hungry because they cannot afford what little food there is.

Australian cricket stuck to the task at hand despite the unfolding events.

Historically timid, the outfit goes about its work in a more robust manner these days. Where once the game may have been abandoned and the players airlifted Saigon-style from the dressing room roof, this time they shrugged and got on with it.

In 1996 Australia conceded its World Cup matches to avoid Sri Lanka’s troubles and for the three decades that followed they avoided any tour where there was a hint of discomfort. Pakistan had been a no-go zone since 1998.

The Sri Lankan series is the second time in two tours that regime change has been the backdrop to the contest.

David Warner posted a note of thanks to the Sri Lankan public after the match saying “we will never forget this trip” and expressed his admiration for people who hosted the side with a smile despite the difficult times.

In Pakistan Imran Khan’s government thrashed about in its death throes as the series continued. The white ball series was moved from Islamabad/Rawalpindi where the government sponsored protests occurred.

Some of the players were anxious about touring Pakistan, but to a man they were happy they did. The minute they felt the love from the crowds in the first Test at Islamabad they knew they had done the right thing.

There were those who questioned the propriety of touring a country when its people are hungry and some of the players were again concerned, but the Sri Lankans let the Australians know just how much they appreciated the visit. At the conclusion of the limited overs match sections of the stand dressed in yellow and held up placards thanking the side for providing some distraction (the tour also generates much needed cash).

Pat Cummins said the experience of playing in the last Test as the protests went on around the match was an eye opener.

“It really hits home how lucky we are,” he said. “In some ways it’s more than just being here to play cricket, you can see the impact it can have.

“It hasn’t been lost on our group, it’s something we speak about quite a bit.”

Cummins has a social awareness rare among sport’ people. Uncomfortable about the IPL being played as the pandemic took its awful toll on India last year he got on the front foot, made a generous donation and encouraged others to do the same.

In Sri Lanka Cummins has used the opportunity and his profile to advance the work of UNICEF in the region. He is an ambassador for that charity and funds early childhood development program in Indigenous communities.

Glenn Maxwell, who has played a lot of his cricket in India, said after the one day series that the players had come to understand just how much their presence meant to the people of Sri Lanka who proved as grateful as the Pakistan fans earlier in the year.

“It was pretty extraordinary. I was just telling the boys ‘that was one of the most special feelings, being able to walk around the ground and have a foreign country all cheer for you,” Maxwell told cricket.com.au.

“A lot of times when Australia tours, we are generally the enemy and there is not many Australian fans in the stands but to have the support and fans that are here at the moment is truly extraordinary. Everyone’s wearing yellow. They have got all the Australian flags all over the place. It’s really special and credit to everyone who has been able to get here.

“It’s been tough obviously for the locals and for them to come out to support us and entertain them and they have had a really good time during the one-day series.”

Peter Lalor is The Australian’s chief cricket writer and has been a reporter for over 30 years. An award winning journalist and author he has covered Test cricket in all parts of the world for the newspaper. He has written, among other things, a history of the Sydney Harbour Bridge, a biography of Ron Barassi, a bestselling true crime book and co-authored a biography of Phillip Hughes.