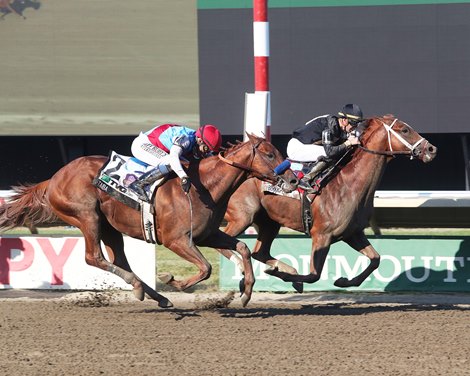 No firm upcoming race plans have been established for Zedan Racing Stables’ 3-year-old Taiba , who finished a close second July 23 to Cyberknife  in the TVG.com Haskell Stakes (G1) at Monmouth Park for trainer Bob Baffert.

“Soundness-wise, he came out of the race OK; there just wasn’t a breath of air that day, and I’m not sure what Bob has in the plans for him,” agent Gary Young told BloodHorse Aug. 3.

The horse shipped back to the West Coast to Baffert’s current base at Del Mar.

“He’s galloping every day and looks good; we haven’t made a plan for him yet,” Young said. “It was an oppressively hot day at Monmouth, and he bounced out of the race fine, but it was sweltering that day. It would be the Travers Stakes (G1) or (Pennsylvania) Derby (G1) next on the agenda. The plans are not firmed up yet.”

If Taiba were to ship in for the Travers at Saratoga Race Course, he would need to transfer to another trainer. In June, the New York Racing Association announced that Baffert was barred from running horses at its tracks until Jan. 25, 2023, due to a series of medication violations from the Hall of Fame trainer, including one involving Zedan Racing Stables’ Medina Spirit in the 2021 Kentucky Derby Presented by Woodford Reserve (G1) at Churchill Downs. None of the violations occurred in New York.

The 3-year-old colt by Gun Runner   has made four starts this year, hitting the board in three of those tests—the Haskell, Runhappy Santa Anita Derby (G1) in his second start in April, and broke his maiden at first asking at Santa Anita Park in March. He finished 12th in this year’s Kentucky Derby.

Young plucked Taiba from the 2021 Fasig-Tipton Gulfstream Sale for $1.7 million.

He added: “They have one (prep race) every month; it sets up and goes Haskell, Travers, Penn Derby; whether we will make all three or not, I don’t know.”