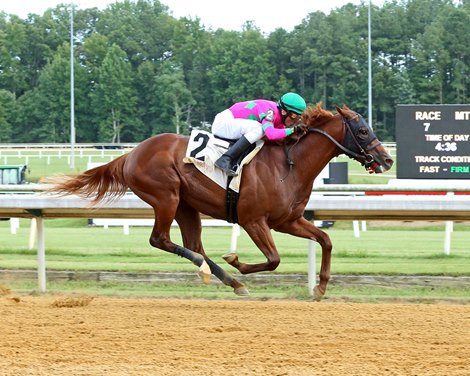 A day after Gunite  vanquished his foes in the Amsterdam Stakes (G2) at Saratoga Race Course, the colt that handed him a 5 1/2-length defeat two months ago captured his first stakes victory in the Aug. 1 $100,000 Housebuster Overnight Handicap at Colonial Downs.

Although he broke his maiden last summer at Colonial on the turf, the 3-year-old son of Jimmy Creed   has since been sensational on the dirt this year, turning in two triple digit Equibase Speed Figures in allowance contests at Keeneland and Churchill Downs. His only loss of 2022 came in the July 9 Iowa Derby, where after setting a swift pace he was collared in deep stretch by Ain’t Life Grand  in his two-turn debut.

Jimmy Creed — You Should Be Here, by Niagara Causeway

Returned to sprinting, Conagher was bet down as the 2-5 favorite in a field diminished to 6 for the seven-furlong Housebuster. Under regular pilot Joe Rocco Jr., the Michael Tomlinson-trainee grabbed the lead a few strides from the gate and cruised comfortably through a :22.37 first quarter and :44.44 half-mile.

Exxel  and second choice Old Homestead  drew even with Conagher around the turn for home but the favorite proved to be too much the best, kicking clear and staving off a determined Old Homestead to score by 2 1/4 lengths.

Old Homestead and 17-1 shot No Sabe Nada  completed the trifecta.