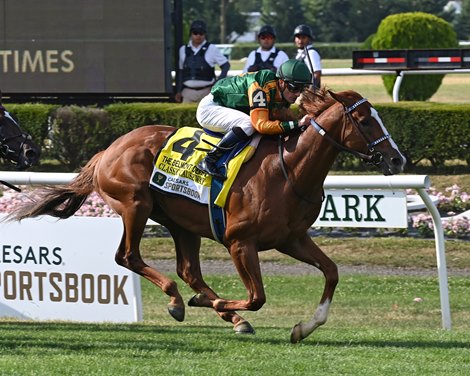 On June 25, two words could have described what the betting public thought of Classic Causeway  in the Caesars Belmont Derby Invitational Stakes (G1T).

The graded-winning son of Giant’s Causeway , owned by Kentucky West Racing and Clark M. Cooper, was cold on the Belmont Park tote board. When the gates opened for the 1 1/4-mile race, Classic Causeway was an afterthought, dismissed at odds of 26-1.

Only two of the other 11 runners had higher odds. Why wouldn’t his number be steep? This was just the first time Classic Causeway was trying the grass.

No one told Classic Causeway that so little was expected of him as the 3-year-old pounced to the lead and never let it go, winning by three-quarters of a length over two favorite European raiders.

Fast forward to summer at Saratoga Race Course, and it’s time to run it back. Classic Causeway will face 10 other 3-year-olds in the $1 million Caesars Saratoga Derby Invitational (G1T) Aug. 6, which will be contested at 1 3/16 miles on the Mellon turf.

He’s getting a little more respect this time, as his morning line odds, set by David Aragona, are 8-1. The Todd Pletcher-trained Annapolis , one of three from the Hall of Famer’s barn, is the 5-2 morning-line favorite.

This spring, after the horse finished 11th in the Kentucky Derby Presented by Woodford Reserve (G1), Kenny McPeek took over the training of Classic Causeway from Brian Lynch, for whom the colt won a pair of Tampa Bay Downs dirt stakes on the Road to the Kentucky Derby earlier in the year. Then, following a third in the June 25 Ohio Derby (G3), McPeek took a big swing on the grass, and the horse rewarded him.

“This horse’s future is huge,” McPeek said. “The first time we ran him, I wanted him to rate a little bit. He didn’t want to rate. He wants to go. He wants to be in front at every point.”

Classic Causeway, as good as he was in the Belmont Derby, will have major challengers Saturday.

Godolphin’s Nations Pride , trained by Great Britain’s Charlie Appleby, finished second behind Classic Causeway in the Belmont Derby, and a head in front of Peter M. Brant, Mrs. John Magnier, and Michael Tabor’s Stone Age , who is trained by Ireland’s Aidan O’Brien. Both of those horses are here for the rematch.

“I could not be any happier with him,” said Chris Connett, the traveling assistant for Appleby. “My fingers are crossed for a big run.”

Pletcher also has WinStar Farm and Siena Farm’s Emmanuel , who won his first grass start, the Pennine Ridge Stakes (G2T). Emmanuel, a front-running son of More Than Ready  , was scratched from the Belmont Derby, having been found in violation of treatment procedures unique to races worth $1 million or more in New York.

Pletcher’s third runner is Whisper Hill Farm’s Grand Sonata . The son of Medaglia d’Oro   was fourth at 32-1 odds in the Belmont Derby, beaten a length.

Rounding out the field are Royal Patronage , Sy Dog , Main Event , Stolen Base , and Ethereal Road , who makes his first grass start for owners Julie Gilbert and Aaron Sones.