Chi Town Lady Rallies From Last to First in Test 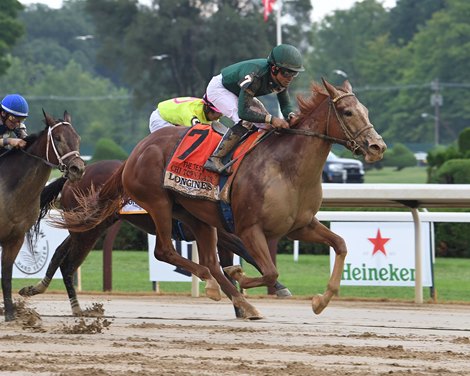 Standing in the winner’s circle at Saratoga Race Course after the $500,000 Longines Test Stakes (G1), Wesley Ward seemed as surprised to find himself there as the pundits who let his Chi Town Lady  go off at odds of 17-1.

“We were hoping for a second or third, a graded placing if the race fell apart, and here we are in the winner’s circle!” he said with a grin.

Winless in two starts in 2022 and entered off a runner-up finish last out in allowance company May 19 at Churchill Downs, Chi Town Lady rallied into the picture Saturday with a strong closing run from the back of a seven-horse field. The 3-year-old Verrazano  filly picked up the pieces under Joel Rosario on a track drenched by an afternoon shower. She drew off to a handy 1 1/2-length score when the seven-furlong sprint indeed fell apart for 1-5 favorite Matareya —who saw a four-race win streak snapped while in pursuit of her second consecutive win at the highest level.

Winner of the Bolton Landing Stakes on the turf last season at Saratoga for Castleton Lyons, Chi Town Lady had back class and a trainer who believed in her enough to take a shot in grade 1 company. And he had that faith even though her only other starts in grade 3 events—the Beaumont Stakes presented by Keeneland Select (G3) on dirt at Keeneland and the Futurity Stakes (G3T) on turf at Belmont Park—resulted in off-the-board finishes.

“She’s been training great,” Ward said. “I sort of was looking at this race after her last race… and gave her a little time because she started coming from behind, and it seemed like she wanted to do that. I had Joel work her here a couple of times, and she was just working phenomenal.

“I told the owners, ‘We’re probably going to be running a 30-1 shot, but I want to take one shot from way back, let her do what she’s been asking me to do, make a big charge, a big run.'”

Rosario put that scenario into play perfectly, relaxing Chi Town Lady well out of it as pacesetter Hot Peppers  posted fractions of :22.54, :45.28, and 1:10.43 on a good, sealed track with Wish You Well  in pursuit.

“Usually when the rain comes over this course it helps the speed kind of kick on,” Ward said. “But it also has the other jocks (aware), they know that as well, so they’re kind of going a little quicker early. I thought, ‘Ah, it’s not quite fast enough for what we need… let’s see what happens. At the three-eighths pole, she started to make her run, and I thought, ‘Well, maybe we’ve got a shot,’ and turning for home, I was like, ‘Well, we’re going to hopefully hit the board,’ and then my boys started hitting me on the back and we won the race!”

Matareya, fifth early, made a four-wide rally and moved up into second, with the eventual winner flying late on the outside, cutting into the advantage of the top two.

Hot Peppers came out half a path just past the eighth pole, and Matareya bumped with Chi Town Lady, who drifted inward, a sixteenth from home. The contact triggered a stewards’ inquiry focusing on the top three finishers. After review, the results were allowed to stand.

Chi Town Lady finished in 1:23.97 while Hot Peppers edged Matareya for the place.

“I was coming down (to the winner’s circle), and they didn’t throw the inquiry sign and I thought, ‘Well, maybe we’ll skate through it,’ and sure enough it came up, and I was a little worried,” Ward said. “Then, watching the replay, I knew that the stewards would probably rule in our favor for that, and they did (by making no change).”

Chi Town Lady returned $36 to win on a $2 win ticket and improved her record to three wins and a second from seven starts, with earnings of $417,800. She was bred in Kentucky by Castleton Lyons, Kilboy Estate, and Gavin Tierney out of the Harlan’s Holiday mare Toni’s Hollyday , who has produced three winners from four starters. Her recent progeny include a winning Mendelssohn   2-year-old in training with Lacy Gaudet for K E M Racing Stable, a yearling colt by Liam’s Map  , and a Game Winner   filly born March 6. She was bred to Not This Time   for 2023.

With the win, Chi Town Lady threw her name into contention for a potential run in a Breeders’ Cup race Nov. 5 at Keeneland.

“We haven’t thought that far, we’ll all sit down here in a couple weeks and figure out which direction we’re going to go, but certainly the Breeders’ Cup’s going to come into play, especially with (Keeneland) being her home track,” Ward said.