Charge It Starts His March Towards Travers 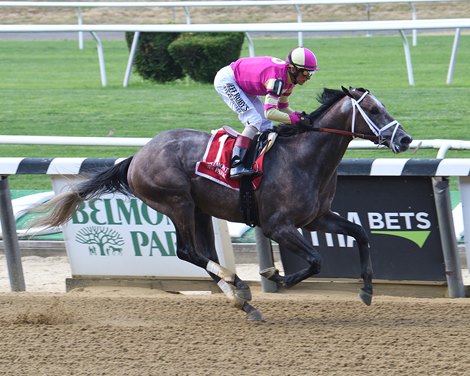 Whisper Hill Farm’s Charge It had his first work since his smashing 23-length win in the Dwyer Stakes (G3) at Belmont Park on July 2.

The Todd Pletcher-trained 3-year-old went four furlongs on the main track at Saratoga Race Course in :49.06 July 30 as he began his march to the Aug. 27 $1.25 million Runhappy Travers (G1).

“We are right on target,” Pletcher said July 31. “We set out to have four breezes (before the Travers) like we did before the Dwyer. The first one went really well. We will do a little more in the next couple weeks. So far, so good.”

Pletcher said he “strongly considered” running the son of Tapit   in the Jim Dandy Stakes (G2), which was won by Winchell Thoroughbreds’ Epicenter  July 30.

“To come back in four weeks off that (Dwyer) effort and then to come back four weeks after that, we thought it might compromise our best shot at the Travers,” Pletcher said. “That’s why we decided to train up to it.”

The Dwyer was Charge It’s first race since finishing 17th in the Kentucky Derby Presented by Woodford Reserve (G1) on May 7.

Charge It, who was ridden by John Velazquez in the Dwyer, has two wins and two seconds in five career starts, all this year.