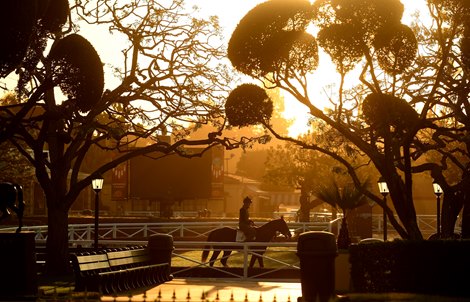 It’s a bad idea to drive mad, eat mad, or go to bed angry. It’s also a bad idea to write while mad, because anger gets in the way of useful tools like clarity, logic, and subject-verb agreement.

Anger can be distilled to passion, however. So it is with a great deal of indignant passion (and, yes, a lingering trace of anger), that we shall revisit the case of Dr. Jeff Blea, a veterinarian of impeccable reputation, and his persecution by the California state Veterinary Medical Board.

To review. Blea, 56, was accused last September by the VMB of violating board procedures. The accusation was based on an anonymous tip and an investigative report from a veterinarian contracted by the VMB in such cases. Those procedures allegedly violated included patient relationships, record-keeping, prescriptions, and treatment of Thoroughbreds during a period of about three months, from January of 2021 to March 2021. The Thoroughbreds in question were trained by a small group of trainers on Blea’s regular client list.

A close reading of the report and accusation reveals a fundamental misunderstanding of the role of the racetrack practitioner, from an exaggerated interpretation of the number of horses routinely treated—each one of them usually familiar to the veterinarian—to a narrow, context-free characterization of drug classifications as they pertain to certain commonly approved equine medications used in the racing environment.

Blea was one of a half dozen vets swept up by the anonymous tip. However, he was the only one who at the time was serving as the equine medical director of the California Horse Racing Board, a role he assumed on July 1, 2021, after stepping away from his practice. Blea’s status provided the VMB with a target rich in headline possibilities. There followed, on Dec. 21, a complaint filed for an interim emergency suspension of Blea’s license to practice veterinary medicine, a radical move based on the charges that also put his position with the CHRB in jeopardy at a time when the state—every state for that matter—was in dire need of Blea’s kind of expertise.

An appeal to vacate Blea’s emergency suspension was denied in February of this year by an administrative law judge who was painfully unclear on either a) the role of the equine medical director, or 2) the definition of the term “emergency.” As a result, UC Davis, which technically employs the equine medical director and swims in the same state government stew as the CHRB and VMB, opted to place Blea on administrative leave.

There he has remained for the past seven months, cooling his heels at home in Sierra Madre, a leafy little village just north of Santa Anita Park, waiting for the legal wheels to grind. There is an appeal pending in L.A. Superior Court to overturn the VMB’s interim emergency suspension of his license to practice. There also was a hearing scheduled on Aug. 8 before an administrative law judge on the substance of the complaint tracing back to the anonymous VMB source. But that has been removed from the calendar for now, with no hearing rescheduled.

Blea was first licensed to practice in California in 1993. Since then his name has been associated with nearly every effort to promote and improve the health and safety of racehorses on a national front. He is a past president of the American Association of Equine Practitioners, where he also served on the task force concerned with equine welfare, professional conduct and ethics, and public policy. While in practice he was part of the On Call program providing veterinary expertise at major televised racing events. He has served on the Grayson-Jockey Club Research Committee, and on the boards of the Southern California Equine Foundation, the Racetrack Medication & Testing Consortium, and the California Retirement Management Account (CARMA).

What should have been a gold-plated hire for the CHRB has turned into a nightmare of unusual inter-agency combat stoked by mysterious, unnamed interests. In his equine medical director role, Blea had been busy working on the application of increasingly complicated veterinary rules and protocols when it comes to the training and racing of the state’s Thoroughbreds. If nothing else, the actions of the VMB have been costly to California taxpayers, who not only are paying for the veterinary board’s representation by a deputy attorney general, but also for private lawyers hired by the CHRB to challenge the VMB’s actions.

“The California Veterinary Medical Board is sadly off base in the Dr. Blea matter,” said CHRB vice chairman Oscar Gonzales. “The CHRB is fully supportive of Dr. Blea, and we have taken important steps that we hope leads to his reinstatement as equine medical director.

Gonzales also noted that “the California VMB is ignoring or missing the voice of large animal veterinarians.”

He got that right. To suggest that the VMB can pass fair judgment on issues specific to racetrack practitioners flies in the face of the board’s makeup.

The current VMB is comprised of six members, with two seats vacant. Board president Kathy Bowler is a political organizer. Vice president Christina Bradbury, DVM, is board certified in small animal internal medicine. Board member Jennifer Loredo is a registered veterinary technician. Board member Jaymie Noland, DVM, is a professor and head of the Animal Science Department at Cal Poly State University in San Luis Obispo. Board member Dianne Prado is executive director of Heart L.A., an advocacy organization for the homeless and their pets. Board member Maria Preciosa S. Solacito, DVM, is senior veterinarian at the County of Los Angeles Department of Animal Care and Control.

Questions persist. If the VMB has a problem with the way racetrack veterinarians practice, why go after a handful of individuals armed with cherry-picked accusations rather than take its concerns to the CHRB directly in the spirit of inter-agency cooperation? How is it possible that one state agency can disrupt the operation of another state agency through a mere administrative action? And why has the VMB to this point ignored protests over Blea’s treatment from the AAEP, the California Veterinary Medical Association, and the American Veterinary Medical Association? (An email requesting comment from the VMB was not answered.)

Reached at home this week, Blea sounded like a man trying hard to cope with the injustice of false and deeply flawed accusations, while finding a few rays of sunlight in the time he has had to himself.

“You go from practicing veterinary medicine for almost 30 years to a day when you can’t even call yourself a veterinarian, so it’s been quite an adjustment,” Blea said. “Everything I did had something to do with being a veterinarian, and that all ended.

“But after 30 years, there was also a lot of things I’d put off that I could finally get to, whether it was repairing and painting a fence, building a bench, restoring an old rocker, or learning how to cook on a wood pellet smoker. And I still get up at four o’clock in the morning.”

Blea counts himself lucky to be surrounded by a trio of supportive women, namely his wife, Annie, a licensed vet, and daughters Faith, 18, and Abi, 16. Suddenly, he had time in the day to be a larger part of their lives.

“Abi runs cross country,” Blea said. “They practice at 6 a.m., so when she asked if I wanted to come along, I could say yes. Faith was accepted to a number of universities, and I was able to get on the road with her for campus visits. She’ll be going to Cal.”

Even so, there has been way too much time to be alone with his thoughts.

“You take a look at things with a different lens,” Blea said. “I started taking better care of my health. I’ve been walking five, six, seven miles a day, listening to Eric Church, or John Cougar Mellencamp, or Springsteen as I walk. I also spend a lot of time on the case, trying to figure out what the necessity for this action was, and the way they went about it.”

Blea is known far and wide, for better or worse, as the one-armed vet, although you wouldn’t know it to observe him at work around horses. He lost the use of his left arm at age 17 when a racehorse he was working as an exercise rider jumped the inside rail and flipped. He responded by dedicating his professional life to the care of horses.

“So I’m used to some adversity,” Blea said. “But I also know there’s a lot of people who have had it a lot worse than me. For now, I’ve tried to keep current with racing news. I tune into the CHRB meetings—as a member of the public—and try to keep abreast of HISA developments. It’s a matter of staying mentally healthy as well as physically healthy so I can be ready to go back to work when the time comes.”

The sooner the better, as far as California racing is concerned. The CHRB’s Gonzales threw down a challenge to those who might be able to push back against the VMB’s overreach in removing an asset like Blea from the field.

“If the public and legislators want to see reforms continue to protect horses and riders, then Dr. Blea should be allowed to do his job,” Gonzales said.

And then somebody said, “Amen.”