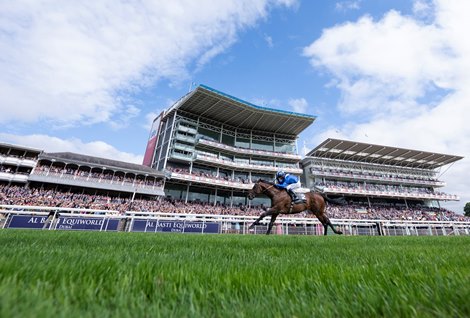 The race was the easy bit, for both Baaeed  and William Haggas. And the truly spectacular outcome made the issues that came before rather fade into the background.

When you train the best horse in the world, the pressure can get to you, and at 1:30 a.m. on the day of the most important race of his life, Haggas found himself dreaming about his superstar losing his tack at the start.

Things got little better when the Yorkshireman found himself stuck in traffic on the way to his home track, where he was desperate for his colt to show the locals what he was made of in the £1 million Juddmonte International Stakes (G1).

And a less relaxed man might have wondered if this was going to be one of those days when he was fined £140 by the stewards who said Baaeed “appeared to be showing signs of a skin condition and the trainer did not have a certificate of non-contagiousness.”

But Haggas has always had supreme confidence in the 4-year-old and was not fazed by the events of the day or his colt’s first try beyond a mile. And, like those punters who availed themselves of odds of 2-5 about the favorite, the trainer never had a moment’s worry.

Jim Crowley was always cruising on a colt he was to label “the perfect racehorse,” and although he turned for home with only one behind him, it was only a matter of when he pressed the button. Baaeed made his ground with staggering ease, was still virtually on the bridle when he hit the front over a furlong out, and scored by six and a half lengths from Mishriff , who had won the race by six himself last year.

Sir Busker  was no match for the top two and finished third.

“I had one or two anxious moments through the day but not in the race, that was the easy bit,” Haggas said. “Being sat in traffic coming in was a nightmare. I should have known better, it’s the same on the first day at Ascot, the traffic’s awful.

“And apparently the vet saw some spots on his neck which he thought were ringworm. I can assure he didn’t leave the yard with any spots anywhere, and when I went to saddle him, I couldn’t find them. It was very unnecessary, and I hope they don’t think that we don’t know what we’re doing.”

Reflecting on the way Baaeed made it a perfect 10-for-10, Haggas added: “It’s a relief more than anything. He’s such a good horse, and he proved it and showed everyone today, and that’s what was so satisfying. That was pretty spectacular. Aren’t we just so lucky? I said to Jim before the Sussex, ‘We’ve got to enjoy this horse, because this time next year when we’re watching something else win the Juddmonte we’ll be dreaming.’

“It’s rarely you see in a high-class race a horse appear on the bridle with two to run looking like he could go at any time. He’s just good, isn’t he? It was a spectacular performance, and I’m glad now that everyone will believe in him. We think he’s fantastic and we have thought so for some time.

“Sure I’ve been slow to get him up in trip, but he’s been so dominant at a mile. This was the perfect opportunity, he clearly stays it well, he’s just got a fabulous engine and a fabulous temperament. As I’ve said a few times, finding another one is going to be the tricky bit.”

Baaeed and his connections after winning the Juddmonte International

‘I never had any desire to run in the Arc’

Thursday’s race served as a “Win and You’re In” Breeder’s Cup Challenge race, providing automatic berth in the Longines Breeders Cup Classic (G1) Nov. 5 at Keeneland. He is not intended for that race, however.

Baaeed will retire after the Qipco Champion Stakes (G1) at Ascot in October, rather than step up to a mile and a half in the Qatar Prix de l’Arc de Triomphe (G1).

“He can’t do both, it’s too close, and we wanted our finale in the Champion Stakes, that’s always been the plan,” Haggas said.

“I never had any desire to run in the Arc, and unless Sheikha Hissa and Angus Gold decide that we’re going to do that and miss Ascot, as far as I’m concerned he’ll be going for the Champion Stakes.”

Nor is there any likelihood of retirement being put on hold, as Haggas added: “He mustn’t race on, he needs to go and earn some money and enjoy a fruitful career.”

Like Haggas, Crowley was confident throughout the race and said: “That was unbelievable, everything went perfectly. I suppose you could say there was a lot of pressure coming here to get the job done, but I never really felt it, I knew how good he was. I was never worried about the trip.

“He’s special, I’ve known from day one. The first time I rode him William said, ‘How good do you think he is?’, and I said, ‘He’s the best you’ve got, he might be the best you’ve ever had’. He’s the perfect racehorse.”