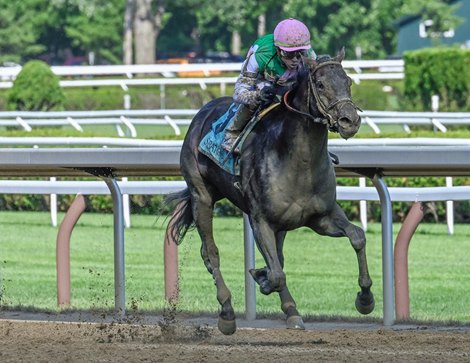 It might seem odd to card two 1 1/8-mile races for 3-year-olds on back-to-back days at Saratoga Race Course, but at times there can be some method to the madness.

In the newest piece of evidence, the virtue of contesting the $135,000 Curlin, a restricted stakes for 3-year-olds, on the eve of the $600,000 Jim Dandy Stakes (G2) came to the fore in producing an intriguing candidate for the Aug. 27 Runhappy Travers Stakes (G1) in Juddmonte’s Artorius .

A decisive 4 3/4-length winner of the Curlin, the homebred son of Arrogate  trained by Chad Brown captured the July 29 stakes in just his third career start and may not have been ready for facing a classic winner and two classic-placed rivals in the Jim Dandy a day later.

“I think it serves a good purpose,” Brown said about the Curlin, a race restricted to 3-year-olds who have not won a graded stakes at a mile or more in 2022. “He really wasn’t ready for a race like the Jim Dandy and this yields another Travers starter if the horse is sound. It’s a race we used to some success in the past to go on to the Travers.”

The victory was Brown’s fourth since the Curlin was launched in 2009, and while none of the trio went on to take the Mid-Summer Derby, his 2016 winner, Connect  , won the Pennsylvania Derby (G2) and Cigar Mile Handicap (G1) later that year.

The lone horse to pull off a Curlin-Travers double was V. E. Day  for trainer Jimmy Jerkens in 2014.

Artorius, out of the multiple grade 1-winning distaff sprinter Paulassilverlining (Ghostzapper  ), certainly will draw some consideration in the Travers as the nine-furlong win came on the heels of a maiden win at a one-turn mile in just his second start.

“I always thought he could be in the conversation with my better 3-year-olds,” said Brown, who trains Jim Dandy starters Early Voting , the Preakness Stakes winner (G1), and Zandon , the third-place finisher in  the Kentucky Derby Presented by Woodford Reserve (G1). “He just had a few minor things, but we were patient with him. To see him finally start to develop, albeit late, hopefully a little like his father (the 2016 Travers winner), maybe it’s better late than never. If he can show up like his sire did, I would be honored.”

Artorius is the first of three foals from his dam, who also has a 2-year-old filly named Parameter, by Into Mischief  , and a Tapit   filly born earlier this year.

“His mother was a seven-furlong horse, but what a brilliant mating to the great Arrogate by Juddmonte to put some speed into a classic distance horse like Arrogate,” Brown said. “I think we have a special one here as a result of it.”

Grandview Equine and Don Alberto Stable’s Gilded Age , a son of Medaglia d’Oro   trained by Bill Mott, rallied from seventh at 10-1 odds in the field of eight to take second by 1 1/2 lengths over 9-5 favorite Creative Minister , a Creative Cause   colt.

Since finishing third in the Preakness Stakes (G1), Fern Circle Stables, Back Racing, and Magdalena Racing’s Creative Minister was fifth in the Belmont Stakes Presented by NYRA Bets (G1) and third Friday, beaten a little more than six lengths.