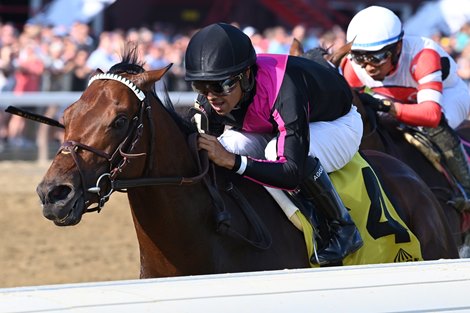 Bruce Lunsford’s Art Collector  takes on three other graded stakes winners in the $135,000 Alydar Stakes, a restricted 1 1/8-mile test for older horses who have not won a stakes other than state-bred in 2022, Aug. 4 at Saratoga Race Course.

Grade 1 winner Art Collector, a 5-year-old, boasts a record of 8-1-0 from 17 starts and lifetime earnings of $1,655,305 as the lone millionaire in the field. Initially trained by Thomas Drury Jr., Art Collector made his debut for Hall of Fame trainer Bill Mott with a gate-to-wire score in last year’s Alydar, defeating graded stakes winners Night Ops  and Math Wizard . The bay son of Bernardini won by 1 1/2 lengths on the pathway to a solid 4-year-old season, subsequently capturing the Charles Town Classic Stakes (G2) and the Woodward Stakes (G1) at Belmont Park en route to a sixth-place finish in the Longines Breeders’ Cup Classic (G1) in November at Del Mar.

Mott said Art Collector could follow a similar trail during his current campaign.

“Those are races we’re looking at, but we have to get through the first one, first,” Mott said.

Art Collector returns from a hiatus after a subsequent 12th-place finish in the Saudi Cup (G1) in February, finishing 12th.

“He was up close to the lead and then everybody in there, several good horses, backed up from the race,” Mott said. “It’s a different kind of track, completely different type of surface. It was safe, but maybe a little heavy, sticky, or laboring might be the best way to put it.”

The son of Upstart   enjoyed a successful 3-year-old season, which included a third-place finish in the Jim Dandy Stakes (G2) at Saratoga. He also won the Ohio Derby (G3) at Thistledown, in defeating fellow Alydar aspirant King Fury .

The Al Stall Jr.-trained Masqueparade was a close second in his 2022 debut, a two-turn allowance optional claimer for non-winners of four races May 13 at Churchill Downs. He earned a victory for the same condition at Churchill next out on June 23.

Joel Rosario, who rode Tom’s d’Etat in the 2019 Alydar, will pilot Masqueparade from post 6.

Trainer Kenny McPeek will saddle Fern Circle Stables and Three Chimneys Farm’s King Fury , who is in search of his first win since a 13-length romp in last year’s Bourbon Trail Stakes at Churchill. The 4-year-old Curlin   chestnut, out of grade 1-winner Taris , has not raced since finishing a distant eighth in the Kentucky Cup Classic on April 2 over the synthetic Tapeta surface at Turfway Park, from which he exited with an injured shoulder.