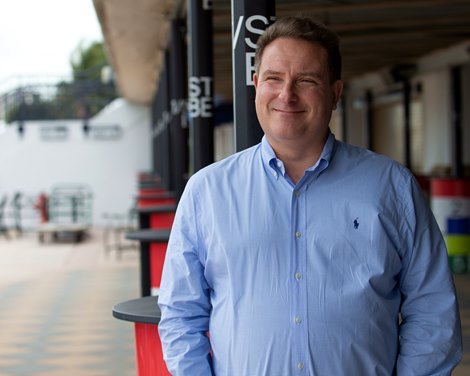 Trainer Mike Maker’s quest for his 3,000th winner may have hit a bump in the road at Saratoga Race Course but it was smooth sailing at Ellis Park.

While Maker’s bid for the milestone win was thwarted Aug. 5 when Laugh and Play  was disqualified from first to second in the second race at the Spa, he connected with No. 3,000 a few hours later when Paradise Farms and David Staudacher’s Palatial Times  and jockey Gerardo Corrales captured the fifth race at Ellis Park, a $7,500 claimer moved from the turf course to the main track.

“It’s great for the clientele and staff,” Maker, 53, said at Saratoga. “It’s another reminder of how old I am.”

Maker knows the claiming aspect of the sport well, developing some of his best horses after claiming them. He is the winningest trainer in Claiming Crown history.

As for the DQ that prevented him from celebrating at the Spa, Maker said, “It is what it is. It’s racing. I didn’t agree with the call, but what can you do?”

The son of a trainer, Maker began training on a regular basis in 2003 after assisting Hall of Famer D. Wayne Lukas. Maker has amassed earnings of about $138 million.

Among the grade 1 winners he has trained are Zulu Alpha , Hansen , Bigger Picture , Fire At Will , Furthest Land , and Stately Victor .